Performed by the award winning doctors in Raleigh, North Carolina

Scoliosis is a disorder in which a person’s spine curves to either the right or left side of the body in an abnormal manner. The spine is naturally somewhat curved, but it should normally appear straight up and down when viewing it directly from the front. Scoliosis patients will have a moderate to severe curvature, with the twisted spine forming an “S” or “C” shape.

Development of scoliosis can happen at any age, but it is most common after the age of ten and is almost two times more likely to be found in girls rather than boys. Scoliosis affects about six million people in the U.S., but only a small percentage has a severe enough case to require extensive treatment.

At Wake Spine & Pain Specialists our goal is to relieve your pain and improve function to increase your quality of life.
Treatments for Scoliosis are generally non-to minimally invasive and are conservative in nature.
Use the form on the right to request a call from our Patient Concierge Group. Give us a call today at (919) 787-7246. 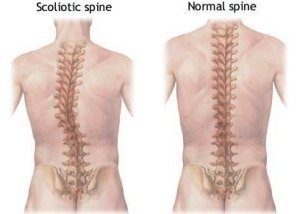 Studies have shown that there are many causes associated with scoliosis. Even though the condition is more prevalent in girls than boys, both genders are susceptible to developing symptoms. In some cases, scoliosis has been linked to genetics, with people being an estimated 20% more likely to develop the disorder if a family member already has been diagnosed.

Treatment for scoliosis is critical, because if the condition is neglected the spinal distortion could worsen. The goal of treatment for any scoliosis patient is to minimize the symptoms of the disorder, prevent any progression of the illness, and improve quality of life.

Most treatment plans will be based on the severity of the patient’s condition and incorporate a wide variety of therapies to increase positive outcomes. Traditional types of treatment recommended for scoliosis are physical therapy, chiropractic therapy, exercise, and daily bracing of the back.

Medication therapy is also commonly used for scoliosis. Non-steroidal anti-inflammatory drugs (NSAIDs) and opioid medications have been found to be most effective with pain relief. Epidural steroid injections have been successful with pain symptoms as well.